MUMBAI: Ashfaq Shiningwala (54), a key financier from Gujarat in a syndicate that smuggled 185kg gold worth Rs 60 crore, was arrested by Directorate Revenue of Intelligence (DRI). The Surat resident is the 14th person to be arrested in one of the biggest international smuggling rackets that DRI busted in March.
DRI had seized 110kg gold concealed in brass, imported from Dubai, but declared as scrap. The accused imported the gold, declaring it as scrap at Mundra and Jamnagar ports in Gujarat, and then got it here by road. DRI later seized another 75kg gold hidden inside a Honda car of Shoeb Zordarwala. The probe suggested that the accused in last two years had smuggled around 300kg gold.  DRI had initially arrested seven persons, including Nisar Aliyar, the kingpin and proprietor of several companies in the US, Dubai and Kochi in Kerala. His accomplices were Shoeb, his son Ahad, Zaveri Bazaar jeweller Raju alias Monoj Jain, Kalpesh Nanda, an assistant of Aliyar, ‘Happy Dhakad’ and hawala operator Aquil Fruitwala. Also seized from the Zordarwalas’ residence was Rs 1.8 crore.

Assam and Meghalaya are incurring revenue losses to the tune of Rs 700 crore... 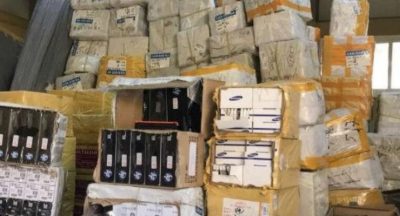 The battle against counterfeit products distribution continues as IT company, HP,...

Attention music shoppers: Some of those random sellers atop the price search...