Authorities in the country are facing a unique problem of storing and disposing of seized contraband, including high-quality liquor, international brands of cigarettes and firecrackers.The Directorate of Revenue Intelligence (DRI) has found that high-quality liquor and international brands of cigarettes are being smuggled in containers of various goods shipped to India from China and Dubai. Most of such products reach the black market. DRI’s total seizure of smuggled cigarettes and alcohol this year is worth around Rs 4.94 crore.The Container Corporation of India Limited (CONCOR), which operates the Inland Container Depots (ICDs) in the country, is also the custodian of the goods smuggled in those containers. The Customs authorities are entitled to auction the seized products after settling various legal issues. However, in many cases, the procedure takes too much of time and most brands of cigarettes cross their expiry date (usually six months) before these could be auctioned.From China and Dubai, the smuggled goods enter India mainly through the two
main trading ports at Mumbai. These are also smuggled via ports at Gujarat, Kochi, Chennai, Vishakapatnam and Kolkata. From the coastal areas, the containers are taken to Delhi by road or by rail.The DRI seized a consignment 1500 bottles of Black Label whisky, 864 bottles of Chivas Regal and 600 bottles of Grey Goose Vodka at Mumbai on October 3. The goods were hidden in a cavity in the container that carried iron-mesh wires. The liquor, worth Rs 1.44 crore, was sent from China.On November 1, the DRI seized a consignment of 50 lakh UK brand Maiwand cigarettes, and 30 lakh Gudang Garam Indonesian cigarettes. The Rs 3.5-crore consignment, which arrived from Dubai, was seized at the Tughlakabad Inland Container Depot (ICD) in Delhi.Another product smuggled into India is the R-22 gas, a refrigerant, which is a restricted item due to its ozone-depleting qualities. There is a high demand for this product in India since the Director General of Foreign Trade is known to have licensed only few companies to export and import it.In May, the DRI seized eight containers of smuggled R-22 gas cylinders and air-conditioners. The cylinders were sent from Malaysia. The DRI also seized a sizeable consignment of firecrackers from China in September this year.Sources say “a very small percentage of the smuggled goods is caught, the rest hit the black market, because it is not possible to check all the containers”. The good seized this year are yet to be auctioned.”The government would receive a handsome amount of revenue if the smuggled goods are auctioned. But this rarely happens, as the courts do not give permission, demanding that the seized container be brought to the court. Although this would be evidence to book the culprits, it is difficult to bring a 40-feet container inside a courtroom. And when the judge does not see it, he can’t approve the auctioning of the goods,” sources said.

Hong Kong (HKSAR) - Regarding a study on illicit tobacco in Hong Kong released... 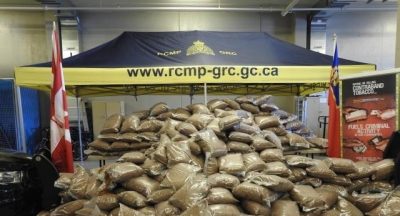 Smuggling of cigarettes of different brands and tax evasion causes a loss over Rs...