Millions of sub-standard face masks and thousands of fake hand sanitisers have been seized at Heathrow since the coronavirus pandemic started.

London Trading Standards said the majority of masks seized had been labelled with false claims or fake safety certificates and around 4.25 million had to undergo label amendments before they were released.

A total of 2.25 million masks were found not to comply with legal safety standards. Trading standards teams examined a further 1.5 million face masks and no issues were found.

Many of the consignments were referred to trading standards by Border Force teams at the airport. The teams also seized 8,000 fake hand sanitisers, branded Andrex and Comfort, at the airport.

Suspicions were raised as they had identical packaging and labelling, except for the brand name, and the same batch code on the entire consignment. Identical fake sanitiser products have been found on sale in Bexley by trading standards officers, officials said. 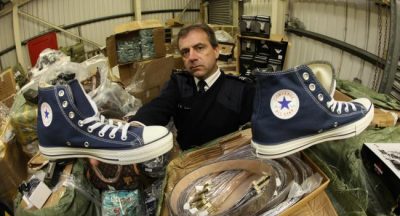 A GOVERNMENT minister is visiting Southampton today to announce a funding boost...

China's crackdown on agricultural smuggling has uncovered 487 cases with a tax...