The Department of Telecom (DoT) slapped penalty of Rs2,800 crore on major telecom companies between 2007 and 2012 after at least 19 lakhSIM cards were found to have been issued by them on fake identity papers.Under pressure, these telecom majors have started shedding SIM cards obtained with fake identity papers and have already deposited Rs 400 crore with the government against the penalty raised against them for failing to adhere to ‘know your customer’ (KYC) norms.The hefty penalty was imposed after TOI highlighted in a series of stories how SIM cards were procured on fake identity documents and some of which were used by terrorists to trigger blasts. When the government and telecom companies were in denial mode, TOI procured two SIMs in the name of then home secretary and the then Intelligence Bureau director without having to deposit any proof of their identity.The two connections, one post-dated and the other pre-paid, were activated by the firms without checking the veracity of the persons in whose name the connections were issued and the documents submitted as proof. Though initially the penalty amount imposed by DoT was Rs 1,000 for each SIM card obtained on fake papers, after 2009, the government raised it to a maximum of Rs 50,000 when huge discrepancies were discovered during scrutiny of customer application forms (CAF) of these firms.The maximum penalty was imposed on those telecom operators whose accuracy rate of correct proof of identity and address (PIA) was less than 80% of the total CAF checked.The telecom companies have, however, contested the graded system of penalty and have instead asked the government to impose penalty based on the income tax slab and that too retrospectively. Doing away with the graded system of penalty may bring down the current demand to one-third of the penalties imposed. A Telecom Disputes Settlement and Appellate Tribunal order has also gone in favour of telecom companies which are seeking lowering of penalty. 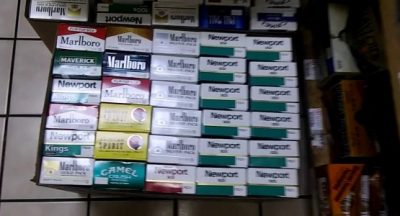 NEW DELHI: Customs officials have arrested 13 men for smuggling into the country...

Over 2,500 cartons of smuggled cigarettes seized

In a major haul of non-duty paid goods by the Customs Department in recent times,...