An Ohsweken man is wanted for allegedly being a buyer in a smuggling ring that involved selling contraband tobacco on Six Nations.
The 38-year-old man was out of the country when about 60 people were arrested Wednesday in a bust headed by the Quebec provincial police.
“He’s not fleeing,” said Quebec police spokesperson Lieutenant Jason Allard. “He just happened to be out of the country. They are just going to wait for him to come back.”

Revenue officers seized 8.4 million cigarettes at Dublin Port on Wednesday as a... 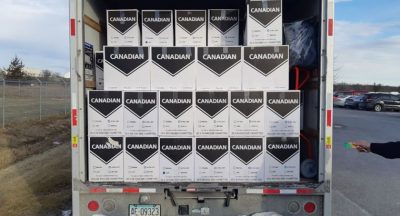 A 64-year-old Quebec man is in jail pending a bail hearing after a traffic stop...