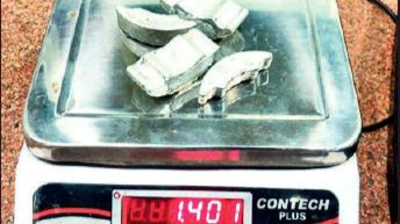 JAIPUR: The customs department at Jaipur International Airport seized around 1,400 gram of gold from a passenger who landed from Dubai on Monday evening.

The gold seized is valued at approximately Rs 69 lakh and further investigation is underway and the passenger has been arrested as the gold is over the allowed limit.

“Customs officers at Jaipur International Airport intercepted one passenger, who arrived from Dubai by Air India flight on Monday evening and after thorough examination of his baggage, 1399.600 gram of gold valued at Rs 68,93,030 has been seized. The said gold was concealed in mixer grinder machine. Further investigation is going on,” said an official.

Lagos — The Nigerian Customs Service says it has uncovered plan by some high...

E-commerce companies Amazon and Dangdang said yesterday they have shut down...

A TRADER found with more than £70,000 of fake clothing has been jailed for ten...