Officials of the food safety department, the police and an Indore-based private detective company seized 15 packs of duplicate Patanjali desi ghee of 1 kg each from a wholesaler in Ambala’s Barara, the police said on Thursday.

Out of the total seized packs, four were taken by the food safety officials for sampling to check adulteration. An FIR was lodged under Sections of the copyright and IPC Acts at the Barara police station on Wednesday.

Akhilesh Pal of the IP Indore Investigation and detective services said they had been authorised by Patanjali and had documents related to copyright and trademark.

“Two wholesalers – Sunderlal Sunil Kumar Traders and Narender Superstore — were checked by us. At Narender superstore, it was found that the design and print of 15 desi ghee packs were different from our client’s company. The packs were made to look similar to the original product,” Pal said.

A 56-year-old company director from Widnes has been arrested in connection with a...

Failed GSD ‘parking centrepiece’ is a den for smuggling activity

In 2010 the then Chief Minister Peter Caruana called the multi-million pound...

With counterfeiting activities growing at the rate of 44 per cent, authentication... 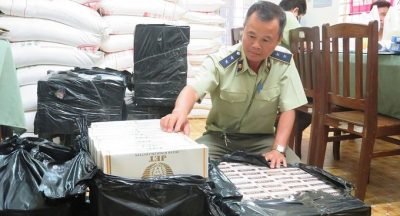