KOLKATA: The enforcement branch has raided the premises of three edible oil traders in the Posta region after receiving complaints that they were blending rice bran oil with deadly dyes and chemicals and repacking them as mustard oil and selling them at Rs 160 per litre, almost Rs 30-Rs 60 less than the market rate. The government has banned blending of mustard oil since July earlier this year.

The EB have seized huge stocks of adulterated mustard oil from three godowns in Burrabazar. The adulteration was being carried out at special anti-chambers set up inside the godown, suspect investigators. “We have collected the samples and sent them for testing. The accused wanted to cash in on the mustard oil price rise and were making a nice profit by using sub-standard products,” said Bidisha Kalita, DC (EB).

According to police, it was around two days back that officers from the enforcement branch carried out a special drive against blended mustard oil based on inputs from various sources. “Samples from each accused were collected after we came to know that they were selling adulterated oil at anywhere between Rs 160-Rs 165 per litre, which is not possible at present market rates if it was pure. We even found underground chambers at each godown.

Karen Millen anti-counterfeit campaign stops sale of over £2.6m worth of fake garments

A 39-year-old man who was arrested by gardai investigating the attempted murder...

Nike Shoes Among Most Counterfeited Goods in the World

The market for fake goods is on the rise, with international trade in... 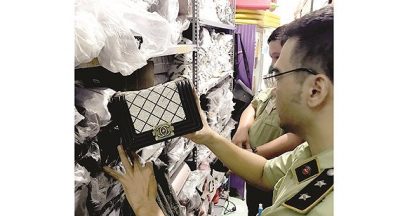