Drug Lane runs through a market in the heart of Accra, Ghana. It’s past the office towers going up to the east of the central business district, past the pushy vendors with fake Louis Vuitton luggage, and past the women selling trays of raw beef under the midday sun. The alley bristles with signboards for pills, powders, and other substances. One store is packed to the rafters with boxes of painkillers and antibiotics. On the wall are two posters: One is for Coartem, a malaria treatment made by the Swiss drug company Novartis, and the other advertises something called Recharger, supposedly made from the male silkworm moth. The notice is vague about specific uses, but it does advise using condoms.The man behind the counter, Yaw Frempong, can’t recommend either drug—at least not formally. Like 85 percent of the people selling medicine in Ghana, he isn’t a pharmacist. Most of his stock comes from China, India, and Malaysia, imported by Ghanaian distributors who supply everyone from “licensed chemical sellers” like him to actual pharmacies and hospitals.

A retired New Jersey state prison employee is accused of smuggling tobacco into... 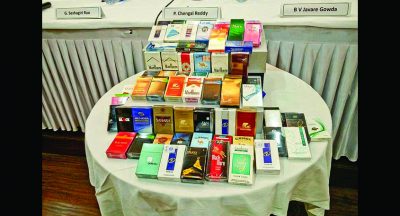 The illicit market in smuggled and counterfeit cigarettes is thriving in India,...

The Growing Threat of Contraband Tobacco

In New York, a handful of federal and state officials are fighting a tough battle...

India Ranks Third for Counterfeit Goods Seized In US: Report