Guwahati:  A massive illegal consignment of foreign cigarettes has been seized by the troopers of Assam Rifles in Mizoram’s Champhai district.

The consignment of foreign cigarettes has been estimated to be worth over Rs 97 lakhs. “The operation was carried out by a joint team of Assam Rifles and customs department Champhai based on specific information,” read a statement from the Assam Rifles.

The statement adds: “Approximate cost of the seized foreign origin cigarettes is Rs. 97,50,000/-. Recovered items handed over to Customs Preventive Force Champhai.” As many as 75 cases of foreign cigarettes were seized in the operation from the Ruantlang area in the Champhai district of Mizoram.

Massive seizures of illegal consignments of foreign cigarettes have been made by the troopers of the Assam Rifles in recent times from the Champhai district of Mizoram.

“Ongoing smuggling of drugs is a major cause of concern for the state of Mizoram, especially along the India-Myanmar border,” the Assam Rifles said.

The cop had seized a huge quantity of smuggled cigarettes of Gudang Garam, a... 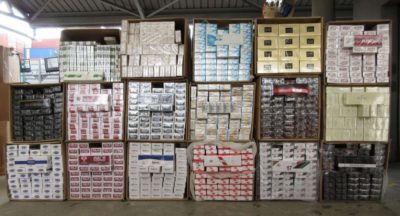 Contraband cigarettes worth more than HK$57 million have been confiscated by Hong...

COIMBATORE: The Directorate of Revenue Intelligence (DRI) have seized 2.6kg of...

Two Arrested For Smuggling Liquor From Telangana To Andhra Pradesh