LUDHIANA: In another success for Customs Commissionerate Ludhiana in its anti-smuggling campaign, the officials of the department have seized gold worth Rs 2.07 crore which was being smuggled from Dubai to India via a flight that arrived at Chandigarh airport on Wednesday.

According to a statement issued by commissioner of customs Ludhiana, Vrindaba Gohil, “On May 25, 2022, the Indigo Flight No. 6E -56 from Dubai to Chandigarh, arrived at Chandigarh International Airport, Mohali at 4.30pm. The Customs airport officers intercepted a passenger based on profiling/intelligence done on APIS and detected 4 gold bricks of 1kg each kept by the passenger in his hand baggage (concealed inside white coloured towel) market value Rs 2,07,56,000. They said 4 gold bricks were seized by the Customs officers and the passengers were arrested. On the same flight, the Customs officers intercepted one more passenger based on profiling/intelligence done on APIS and detected 5 cut pieces of gold chain weighing 142 grams, market value of Rs 7,36,838, concealed in used clothes which were kept in red colored back pack carried by the passenger.”

Statement also said, “They said 5 cut pieces of gold chain were seized by the Customs officer. Further investigations are under process as per Customs Act 1962.”

“Since the start of International Flights from Chandigarh International Airport, Mohali, many cases of smuggling of Gold in the form of Biscuits/ Bricks have been detected by the alert Customs staff. Currently, Chandigarh airport caters to nine weekly flights to and fro Dubai and Sharjah, and the Customs officers have vide their alertness and agility thwarted several such attempts of smuggling of gold and other contrabands. 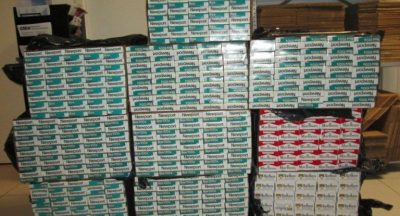 It's time for New York leaders to wake up and listen to state law enforcement...

On this year’s World Consumer Rights Day, CCTV exposed that baike.com, a popular...

COIMBATORE: The Directorate of Revenue Intelligence (DRI) have seized 2.6kg of...