South Korea’s tax agency said Wednesday that it has launched an investigation into 66 individuals on suspicions that they are involved in evading taxes by making and distributing illegal fake oil products. The individuals under the probe by the National Tax Service (NTS) are suspected of making and distributing unauthorized oil products by mixing gasoline or diesel with much cheaper kerosene or solvents which are not subject to taxation. Unauthorized fake oil products have long been overtly sold by vendors near highways or gas stations. The government bans the products as they could threaten users’ safety and are highly unstable compared to authentic fuel products. “Through this investigation, we will trace down the money flows of those involved in the whole process from manufacturing to distributing such fake products by utilizing data provided by the Financial Intelligence Unit,” an NTS official said, referring to a financial data-collecting body of the government. If the tax evasion charges prove to be true, the tax agency said that it will collect unpaid taxes from them and ask the prosecution to conduct a criminal investigation of those involved. The tax probe is the first action taken by the new government of President Park Geun-hye against the so-called underground economy as it seeks to toughen its clampdown on tax evasion and broaden its revenue base. The underground economy refers to business and economic activities including many illegal transactions, which leaves the government unable to regulate and impose taxes. Park, who was sworn in on Monday, has said that she will beef up efforts to police the underground economy in a bid to secure money needed to fulfill her campaign pledges such as extended welfare programs. Fake oil is much cheaper than authentic gasoline and diesel products but experts worry that it could inflict damage on engines and threatening users’ safety. It is also criticized for emitting a larger amount of pollutants into the air. The government sets its sight on the fake oil market not just for such safety and environmental issues but also for its ever-growing size and ever-growing amount of evaded taxes. According to the Korea Petroleum Quality and Distribution, tax evasion taking place in the fake oil market is estimated at about 1 trillion won (US$919.1 million) every year. The government suspects that this money could flow into the underground economy where it can be used for many illegal activities. 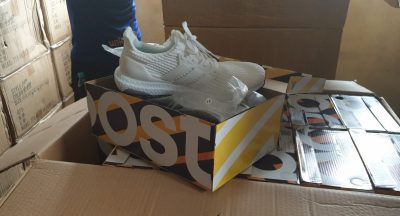 Various counterfeit products, such as clothes and cosmetics, worth P740 million...