Federal agents are investigating a case of counterfeit baseball hats coming from Hong Kong into the U.S. through the Port of Milwaukee. And the suspect, Darvin Moore, is no stranger to investigators. Moore, 39, was convicted in 2004 on two counts of trafficking in counterfeit goods and received five months behind bars. Moore is named as the suspect in a scheme to traffic in counterfeit baseball hats, according to a search warrant unsealed in federal court in Milwaukee recently. Moore could not be reached for comment. He is not charged in the current case. According to the search warrant by an agent from the Department of Homeland Security, more than 500 counterfeit baseball hats were seized at the Port of Milwaukee in April and May of last year. They bore the logos of teams from the NBA, NFL and other professional leagues. The hats were from Hong Kong and supposed to be delivered to “Dravin Moore” in Milwaukee, before they were intercepted. The agents flagged the packages because they came from a sender known to deal in counterfeit goods, according to the warrant.  One of the shipments was scheduled to go to William Spanos, of Iron River, Mich. Contacted recently, Spanos said he ordered the hats over the Internet after receiving an online solicitation. 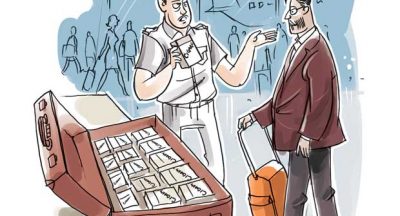 In past 18 months, department of revenue intelligence has seized 50 containers of...

Ohio’s cigarette tax proposal would light up a black market

Cigarette smugglers, or “buttleggers,” will “load up a U-Haul” with cigarettes...