The 8th consultation at Chennai brought experts to raise the concern over the growing illicit trade andto create large-scale awareness among the impacted segments of the society. The cause the seminar witnessed huge participation of over 100 delegates. Mr. M Rafeeque Ahmed, Chairman, FICCI Tamil Nadu State Council welcomed the dignitaries and highlighted the objectives of the seminar like generating awareness, interaction with law enforcement agencies and sharing best practices.The seminar was inaugurated by Hon’bleMr. Justice K N Basha, Judge, Madras High Court, he stated that the problem of smuggling and counterfeiting is the worst evil faced by the economy of the country. Justice Basha also stated that such activities cause damage to the industry, loss to the exchequer, revenue and tax problem to the government and a huge loss to the public at large, he emphasized on the enlightenment of the society, “unless the mind set changes the society will not change”.

Ms. Mala Srivastava, Chief Commissioner of Customs, Tamil Nadu said that counterfeiting and smuggling continue to thrive globally due to the weakness of the consumers desire to acquire branded products at low cost and the lack of awareness about the hazards adds to this menace. She emphasized on discarding the fake products and to awaken the spirit among all individuals and to take a pledge and work towards the common aim.

Mr. P Murari IAS (Retd.) Advisor to FICCI President & Former Secretary to President of India appreciated FICCI CASCADE for its initiative and advocated to have Fast Track Court to solve this menace. Recalling Mahatma Gandhi he quoted his words “There is enough in this country to satisfyman’s need but not enough to satisfy man’s greed”.

Seminar observed editorial support from three leading newspapers, Mr. K. T. Jagannathan, Deputy Business Editor, The Hindu raised his support to the cause and asked for the support of the masses tofight this evil. Mr. R Bhagwan Singh, Consulting Editor, Deccan Chronicle shared his experiences andpledged for the editorial support. He emphasized on “ask for the bill’ and also address the youth andsaid that media will be your platform. Mr. G Babu Jayakumar, Deputy Resident Editor, The New IndianExpress quoted counterfeiting and smuggling as a crime and seek information from the industry toeliminate unscrupulous activities.

Ms.Kalpana Reddy, First Secretary, US Patent & Trademark Office, U.S. Department of Commercehighlighted various legal options – civil, criminal and administrative for the enforcement of IntellectualProperty Rights. She presented various dimensions of IP crimes. IP Crimes lead to economic harm torights holders, revenue loss to the states, consumer confusions, public health and safety etc.The seminar ended with a common view that the problem of counterfeiting and smuggling ismultifaceted and complex and need to be discussed time and again, with government, to emphasizeon effective and adequate laws and enforcement; increasing engagement with the industry and mostimportantly creating awareness in the society to curb the menace of counterfeiting and smuggling. 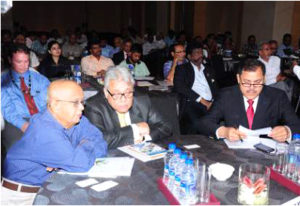 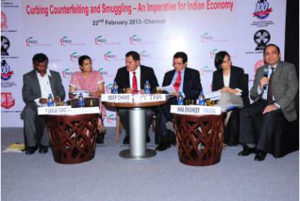 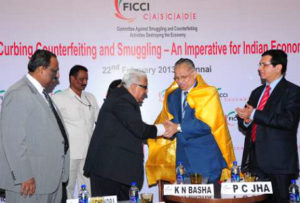