India’s economic growth story has attracted the world’s attention, bringing new challenges for the domestic economy. One of the major issues for the economy and the industry is the uninhibited growth of counterfeit, fake and smuggled goods. The market for fake and counterfeit products is thriving in India and is today one of the biggest challenges faced by Indian industry. FICCI’s Committee Against Smuggling and Counterfeit Activities Destroying the Economy – FICCI CASCADE, with the participation of all leading industries from all sectors of the economy, is committed to fight this twin menace of counterfeiting and smuggling.

FICCI CASCADE, with a view to engage all relevant stakeholders including government representatives, enforcement agencies, excise and customs, consumer activists, media as well as industry and legal experts, and to sensitize them to fight against counterfeiting and smuggling, organized a seminar on “Curbing Counterfeiting and Smuggling – An Imperative for Indian Economy” on 18  September, 2014 in Hyderabad. The seminar brought together experts to raise concerns over the growing illicit trade and to create large-scale awareness among the impacted segments of the society. 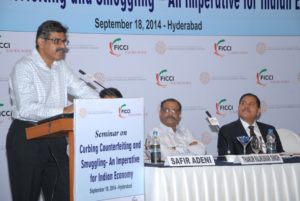 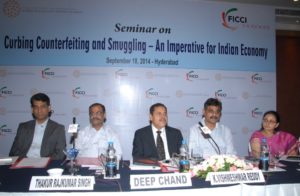