“The damage caused by counterfeiting and smuggling is threefold – impacting producers, consumers and government. We should all participate in this collaborative process initiated by FICCI CASCADE in order to uproot this menace.” This was stated by Dr. Kiritbhai Solanki, Hon’ble Member of Parliament in a seminar organized by FICCI CASCADE in Ahmedabad on addressing counterfeiting and smuggling and aiming to spread consumer awareness against the menace of illegal products. Hon’ble MP also urged industry and consumers to come forward and help the Government and police in preventing illicit trade. As a member of Standing Committee on Finance, Dr. Solanki assured that he will take up the cause to the committee so that brainstorming can be done in this direction.

FICCI CASCADE, with a view to engage all relevant stakeholders like government representatives, enforcement agencies, excise and customs, consumer activists, media as well as industry and legal experts, and to sensitize them to fight against counterfeiting and smuggling, organized this seminar in Ahmedabad on “Curbing Counterfeiting and Smuggling – An Imperative for Indian Economy” on 10th October, 2015. The seminar brought together experts to raise concerns over the growing illicit trade and to create large-scale awareness among the impacted segments of the society. Illicit trade has attracted considerable attention among trade associations, government and enterprises.

Mr. Jatin Trivedi, Chairman, Legal sub-committee, FICCI Gujarat State Council stated that FICCI has always been a torch bearer with the betterment of society and the country at large. FICCI CASCADE is one of the lamp under which the responsibility is taken by it to spread public awareness about the issues of counterfeiting and smuggling. Mr. Trivedi welcomed the dignitaries and highlighted the objectives of the seminar like generating awareness, interaction with law enforcement agencies and the need for sharing best practices. He observed that India was at the world’s spotlight with a most dynamic economy. Hence, safeguarding the rights of legitimate industries is imperative. Mr. Trivedi added that the growing illicit markets undermined the business environment and restrained development of the country’s much anticipated growth trajectory.

FICCI CASCADE advisor, Mr. P. C Jha, also an ex- Chairman, CBEC pointed out that as illicit trade had become an economic problem of international importance and has been growing dramatically across the globe. Strict legislations, enforcement, protection of intellectual property rights are required to curb the peril. Mr. Jha further emphasized that it order to completely eradicate of this global menace, demand side of counterfeiting should be fought first. Genuine brand owners, media and other government agencies should join hands to educate consumers and to make them aware of the need to shun counterfeit and smuggled products willfully. Mr. Jha also shared his thoughts on how high rates of taxation on products are aggravating the problem of counterfeiting and smuggling. For example an increase in excise and VAT rates on products such as tobacco and alcohol incentivizes counterfeiting, thereby, causing heavy losses to the ex-chequer. Thus, enforcement of high taxed goods should be of high priority for governments to avoid tax evasion.

Dr. Bhagirath Patel, Chairman, Innovation Programme Drive, Gujarat Innovation Society, in his address said that over the years quality of life has changed because of innovation, however counterfeiting hampers the innovation leading to a poor quality of life. He also emphasized on the need for protection for legitimate products.

The seminar also marked the enthusiastic and encouraging support of Ms. Anindita Mehta, DGM, Consumer Education and Research Center, Ahmedabad. Ms. Mehta stressed on the fact that sustained awareness was required amongst consumers which should also include awareness on quality standards. Ms. Mehta complimented FICCI CASCADE on its initiatives which she said were not only in public interest, but in the larger interest of the nation.

Following the Inaugural Session, a panel discussion on Organized Crime Surge in India – Role of Enforcement Agencies in Combating Smuggling and Counterfeiting was held, which saw lively interactions of representatives from enforcement agencies and the audience. Panelists included Mrs. Meera Ramnivas, Addl. DGP (CID Crime), Government of Gujarat and Ms. Vrindaba Gohil, Additional Commissioner, Customs, Mundra, Gujarat, The session was chaired with by Mr. Deep Chand, Advisor FICCI CASCADE and former Special Commissioner of Police, New Delhi. Mr. Deep Chand remarked that illicit trade activities are a huge challenge before enforcement agencies.  He emphasized the role of enforcement officials in fighting this menace, however he stated that this not possible with adequate support from Industry players and consumers.  All the panelists agreed that on information sharing among all stakeholders as being a key to curb this menace.

Mr. Param Shah, Head, FICCI Gujarat State Council proposed the vote of thanks. The event was supported by Gujarat Innovation Society (GIS) and was attended by more than 125 industry captains, representative from consumer forums, Government officials and stakeholders in this segment. 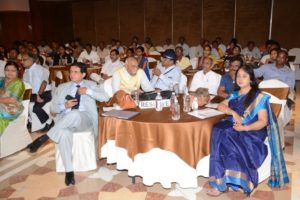 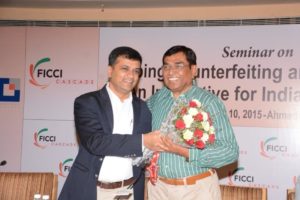 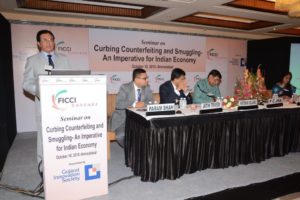 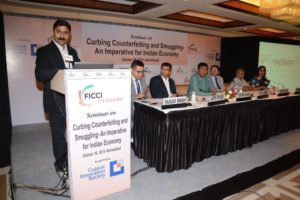 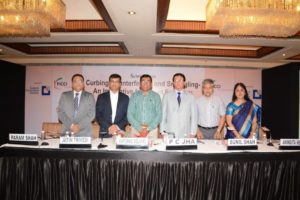 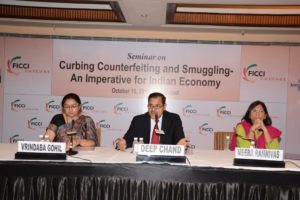