As a part of its series of nation-wide awareness campaigns to highlight the issue of growing menace of counterfeiting and smuggling, FICCI CASCADE (Committee against Smuggling & Counterfeiting Activities Destroying the Economy), organized a seminar and candle light congregation at East Bourne Hotel, Shimla on September 30, 2015. Over 100 students with candles in their hand and banners stating ‘Buy Make in India’ and ‘Say No to Smuggled Goods’ participated in this congregation with much zest and zeal.

Mr. Anirudh Singh, MLA from Kasumpti was the Chief Guest at the congregation.  He said that counterfeits and smuggled goods were threatening the key elements of India’s growth strategy vis-à-vis technology, invention and innovation which were the key elements in India’s economic developmental agenda.Congratulating FICCI CASCADE for taking the initiative to generate awareness among consumers on the perils of counterfeits and smuggled goods, Mr. Singh emphasized that illicit trade curbes country’s economic independence.  He urged the participating students to take a pledge against using fake products and to fight the menace of smuggling which was in the larger interest of the nation’s economy.

Mr. P C Jha, Advisor, FICCI CASCADE & former Chairman, CBEC stated that according to a recently released FICCI CASCADE study,the total loss to the government estimated for 2014, on account of the illicit markets in respect of seven manufacturing sectors was Rs 39,239 crores. Further, during the last twenty years, the volume of the counterfeiting activity has increased 100 times and the size of trade in counterfeited goods is 10% of the legal international trade.He observed that the need for awarenessof consumers,particularly the youth, on illicit trade practices as vital. Mr. Jha also emphasized that purchases, as far as possible, should be done against bills.

Over 100 students with candles and banners participated in the fight smuggling and counterfeiting.  The candle light congregation was organised to highlight the issue and focus on the growing menace of counterfeiting and smuggling.\ 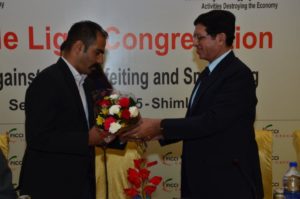 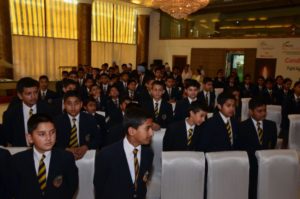