Candle Light Congregation on Fight Against Counterfeiting and Smuggling, Thiruvananthapuram

As a part of its series of nation-wide awareness campaigns to highlight the issue of the growing menace of illicit trading activities, FICCI CASCADE also organized a candle light congregation for the students of Christ Nagar College, on 22nd February 2018 in Thiruvananthapuram. Over 200 students, with candles in their hands and banners stating, ‘Buy Make in India’ and ‘Say No to Smuggled Goods’ participated in this event with much zest and zeal. The congregation urged all to take a pledge against using fake products and to fight the menace of smuggling which was in the larger interest of the nation’s economy. The Principal of Christ Nagar College, Rev. Dr. Titto Varghese, commended FICCI CASCADE’s endeavour in initiating the nation-wide movement against counterfeit and smuggled goods. IGP Crime Branch, S Sreejith, who was the Chief Guest at the congregation, said that activities involving illicit trade curbed the economic independence of the nation and there was the need to collectively counter this menace. 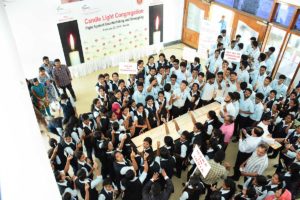 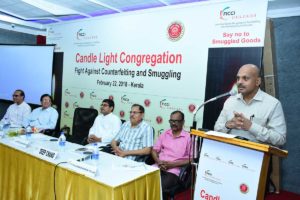