Illicit business networks are infiltrating and undermining licit markets globally. In the process, they are jeopardizing public health and safety, discouraging research and development, and eroding government revenues, thus hurting the economic development of countries across the world.

With the objective of engaging relevant stakeholders, including government officials, enforcement agencies, youth, the media, industry, legal experts and consumer activists, and to sensitize them on the severe adverse impact that counterfeiting and smuggling activities entail, FICCI CASCADE organized a series of programme in Kerala during 21st to 23rd February 2018. The events provided a useful forum to deliberate on the challenges posed by the growing levels of such illicit activities, and generated valuable exchanges among the participating stakeholders.

On 21st February 2018, a seminar on the theme “Combating Counterfeiting and Smuggling – An Imperative to Accelerate Economic Development” was organized in Thiruvananthapuram, where experts from various fields came together to discuss the growing concern over illicit trade in the state and the need for awareness generation on the many adverse impacts of the menace among the impacted segments of the society.

Mr. V. S. Sunil Kumar, Minister for Agriculture, Government of Kerala, the Chief Guest on the occasion, underlined the need to generate awareness on the ill effects of such illicit trading activities, especially in a maritime state like Kerala, and the need for all concerned to fight this socio-economic menace. He observed that smuggling was emerging as a major threat to national security, and the funds generated through the large quantities of smuggled products, particularly of electronic products, foreign cigarettes, gold etc., were being used by criminal syndicates and terrorists.

Mr. P C Jha, Advisor FICCI CASCADE & Former Chairman, Central Board of Excise and Customs, pointed out that counterfeiting was the biggest scourge impairing the world’s economy, accounting for almost 10% of global trade. Elaborating on the magnitude of the problem, Mr Jha informed that in India the total loss to the government in respect of just seven items, as per a FICCI CASCADE study estimate, had increased steeply from Rs. 26,190 crore to Rs. 39,239 crores.

While observing that cigarettes, saffron and gold were the most smuggled items in Kerala, he said that loopholes in the taxation policy encouraged tax evasion leading to smuggling of goods. He also stated that counterfeiting was the number one crime of 21st century, putting at stake brand owners’ reputation, causing severe loss of revenue to the public exchequer, and posing a serious threat to the security – nationally and internationally.

The seminar also included a panel discussion on ‘Countering the Menace of Counterfeiting and Smuggling – Resolutions and Possible Solutions’, where experts from related areas discussed the issue at hand. Mr. Deep Chand, Advisor, FICCI CASCADE and Former Special Commissioner of Delhi Police, in his address said “8 to 15% of global GDP is impacted due to illicit trade and criminal activities. It is time that we, as a national and as a part of the global economy, call for stern and resolute counterstrike force against such ill-intentioned activities”.

The seminar also marked the enthusiastic and encouraging support of enforcement officers. Mr. S Sreejith, IG, Crime Branch, Kerala Police said that counterfeiting and smuggling activities soon graduated to organized crimes, and to check these, the law enforcement agencies should be made more powerful. Joint Commissioner of Customs, Mr. Aneish P Rajan, pointed out the lack of manpower and facilities to check the rising number of sophisticated smuggling activities in the state. He also expressed the concern that international smuggling networks appeared to be increasingly recruiting Kerala youth as carriers. Both the enforcement officials underlined the importance of consumer support in fighting the problem of counterfeiting and smuggling, the need for their active involvement in the cause, and how by merely registering their complaints with the police and custom departments could make a difference.

Adv. Jayakrishnan, Secretary, Bar Association of Thiruvanthapuram, spoke on the challenges faced in countering illicit trade, including the shortage of manpower, leakage of vital information, slow prosecution, corruption among officials, IPR crimes not given adequate importance – among others.  Mr. S.N. Raghuchandran Nair, President, Trivandrum Chamber of Commerce and Industry, said that the quest for luxury products like mobile phones, consumer durables etc. among consumers and specifically the youth was very high. We need to enlighten them on the related loss of revenue, educate the masses on the ill-effect of such products on their health and safety, impose stricter punishment and raise the will to curb the menace of illicit products. “Smuggling takes place in various forms including mis-declaration and undervaluation. Markets across India are flooded with smuggled items, consequences of which are alarming” said Mr. Shibu Prabhakaran, President, Kerala Chamber of Commerce and Industry. Mr. Arjun, Director, Parthas Textile and Dr. P T Ajith Kumar, CEO, Lights Logics Holography & Optics also spoke extensively on the subject.

Over 120 delegates attended the seminar and the event generated constructive interaction with delegates demonstrating an active interest in the issue. 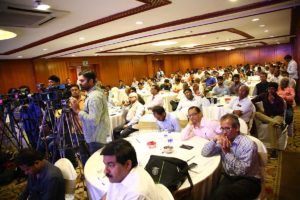 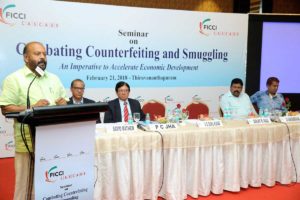 Seminar on Containing Counterfeiting and Smuggling -A Step Towards Prosperous Nation Building,  Chennai