BENGALURU: Customs officials have seized over 10 lakh cigarettes worth Rs 2 crore that was smuggled from Bangladesh and Myanmar to Bengaluru. The cigarettes were stored in three godowns in the city market. A Bengaluru resident has been taken into custody.

M Ramana Reddy, additional commissioner, city customs commissionerate, said a man who was trading foreign cigarettes was detained on June 8 and three godowns in the city market area were raided on June 28. More than 16 brands of international cigarettes worth Rs 2 crore were found there. These cigarettes were illegally sold in pubs, bars and other high-end outlets.

“There was intelligence input about cigarettes being smuggled from Bangladesh to Bengaluru via Kolkata by train. Officials intercepted the goods train in Yeshwanthpur and the City railway station and seized a portion of the consignment. While the transporters escaped, the officials got whereabouts of the recipient of the consignment and picked him up for questioning. He took the officials to the location where he transported the goods,” an official said.

Officials said as there’s a huge demand for imported cigarettes in Bengaluru, two consignments used to arrive by train every week. This was helping traders evade taxes. The cigarette packets do not carry pictorial health warnings as required under the Cigarettes and Other Tobacco Products (Packaging and Labelling) Amendment Rules-2017.

Gold worth Rs 32 lakh seized from passenger at Chennai airport. 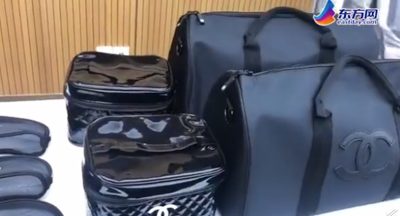 Shanghai police have reportedly seized copycat products worth more than 1.7...

Anti Counterfeit Market for Food and Pharmaceuticals Expected to Reach US$79.3 Billion by 2014

According to a new market research report, ‘Anti Counterfeit Market for Food and...