Webinar on Combating Counterfeiting and Smuggling during the COVID-19 Pandemic and Beyond, Madhya Pradesh

Illicit trade in terms of counterfeiting and smuggling have emerged as one of the most formidable challenges before the nation, especially during the current coronavirus pandemic which has led to an economic distress. Illicit traders have always attacked vulnerabilities, be it brands, supply chains or consumers. As the perpetrators are looking at innovative ways to deceive the system to carry out their activities, they in turn deeply harm the economic interests of the nation. It is important to note that there is a steep rise in cases of smuggling and counterfeiting during the past few months, adversely impacting not only the government exchequer and industry sales, but also threatening local industries on which livelihoods of many depend.

More so, as a result of the supply chain disruptions, globalisation has now taken a back seat and nations are increasingly looking inwards to fulfill their needs and requirements. PM’s clarion call to promote local manufacturing and local goods will also play a crucial role to address the demand and supply gap and deter cross border smuggling.

Hence it was felt that it is vital to discuss and understand the disruptions caused by the pandemic. As new vulnerabilities emerge, and existing vulnerabilities at greater risk of exploitation by criminals, tackling this global scourge becomes even more acute and urgent in the current scenario. It is with the above background, FICCI’s Committee Against Smuggling and Counterfeiting Activities Destroying the Economy (CASCADE) organized a webinar on ‘Combating Counterfeiting and Smuggling during the COVID-19 pandemic and beyond’ on 29th July 2020. The webinar focused on the state of Madhya Pradesh and was a part of a series of such interactions to be organized across the country by FICCI CASCADE to highlight this issue and elicit response from different states.

Shri Sanjay Kumar Shukla, IAS, Principal Secretary, Industrial Policy and Investment Promotion, Government of Madhya Pradesh was the chief guest at the webinar. Mr. Shukla said, “Government, law enforcement agencies, industry and consumers must come together to identify the gaps and act in a coordinated way to address counterfeiting and smuggling”. He further added that in order to eliminate this problem in India, FICCI can share international best practices and actionable points to the government on how other countries have been able to counter this problem successfully.

FICCI CASCADE Chairman, Mr. Anil Rajput while welcoming the distinguished guests and participants said, “I must compliment the Madhya Pradesh government and the enforcement agencies for relentlessly pursuing the perpetrators of illicit trade. Despite the mammoth challenge posed by the Covid-19 pandemic, their hands on approach and alertness has been highlighted by seizures of large number of cigarettes, liquor, synthetic milk, fake currency and much more. I’m confident that going forward they will keep up their stellar performance and continue to play an extremely important role in our fight against illicit trade”.

Speaking on ‘vocal for local’ being a potent tool in our fight against Illicit Trade, it was emphasized that as India starts to produce strong domestic brands and gradually reduces its dependence on foreign products, the circulation of foreign goods will over a period be reduced. As the profits begin to dry up, it will subsequently demotivate the criminals to further undertake such illegitimate activities.

As several cases of seizures of illicit goods are being reported amid the COVID-19 pandemic, Mr. Vipin Maheshwari IPS, Additional Director General, Special Task Force, Madhya Pradesh Police in his address said that COVID-19 is a wakeup call for all of us. No product category has been spared, be it milk, cosmetics, clothes, footwear, seeds, fertilizers or pharma. Mr. Maheshwari was of the opinion that sustained awareness campaigns for people, necessary amendments in laws, increasing penalties and sentences, more product testing laboratories are some areas where the government, police and business community should work together to eliminate this challenge.

The session was chaired by Mr. P K Malhotra, Former Secretary, Ministry of Law and Justice, GoI and Think Tank Member, FICCI CASCADE. Mr. Malhotra highlighted that smuggling and counterfeiting harms the economy in multidimensional ways and the problem has been aggravated by globalisation and increased mobility. He also emphasized that effective coordination between central and state agencies, strengthening domestic manufacturing, addressing the demand and supply gap and leveraging technology are needed to make a conducive environment free from illicit products.

The webinar underscored the need for policy level coordination between government and the industry to address this menace. Illegal trade not only leads to revenue loss for the government but also leads to unemployment and hence a more focused and collaborated approach along with training and sensitization of enforcement officers for such crimes was much needed. The webinar was attended by industry, government officials, officers from the enforcement agencies and stakeholders in this segment. 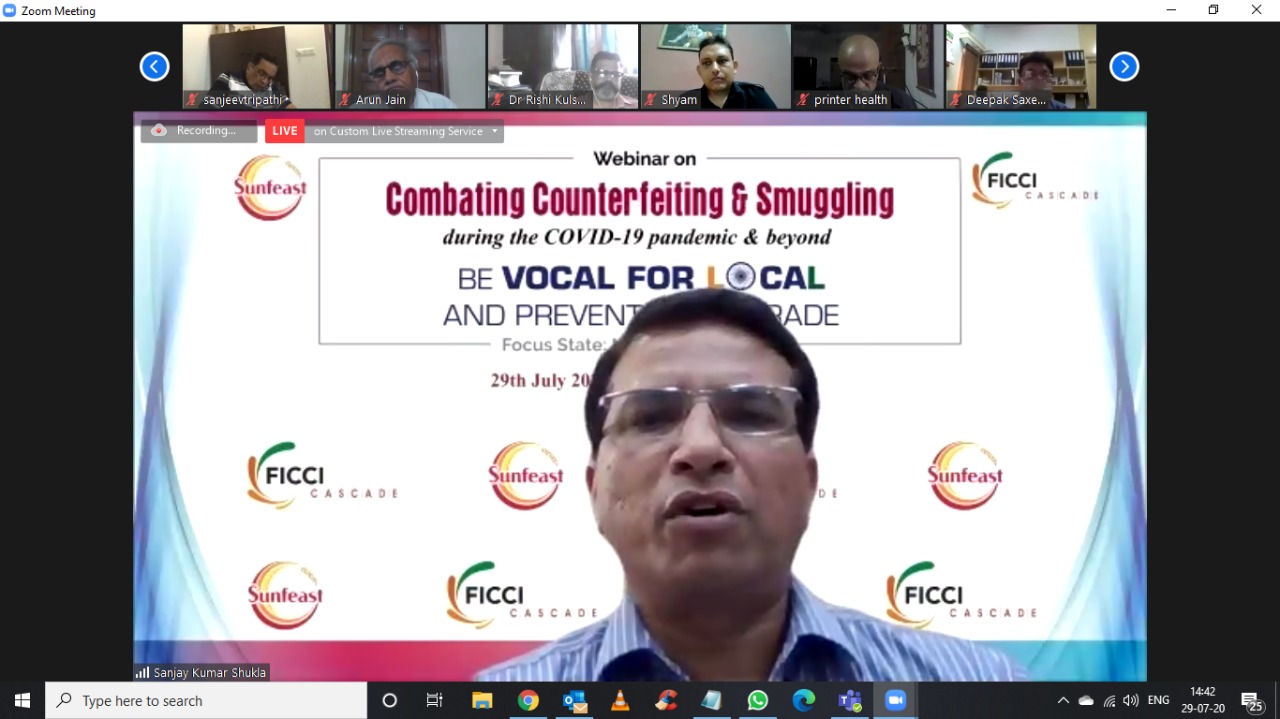 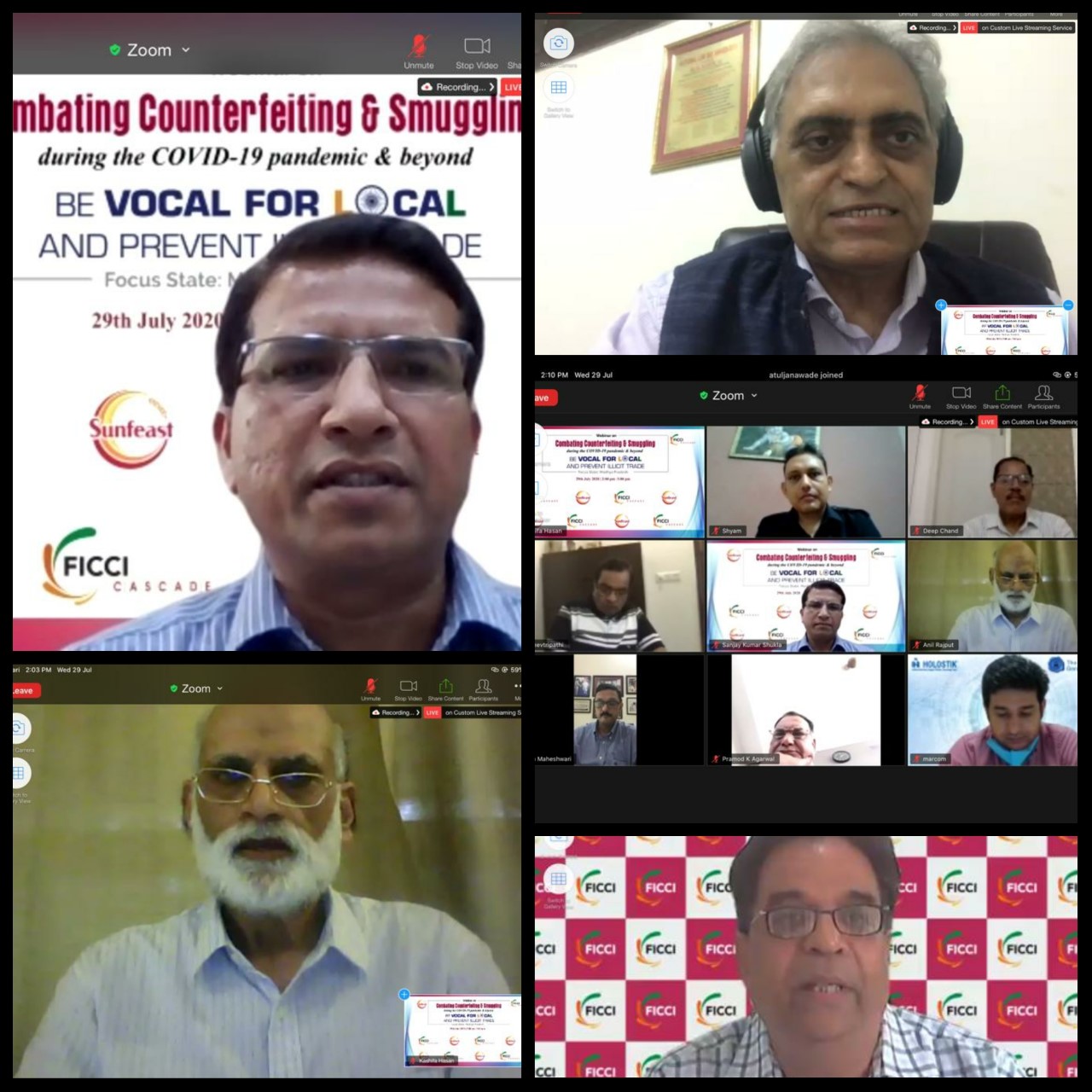 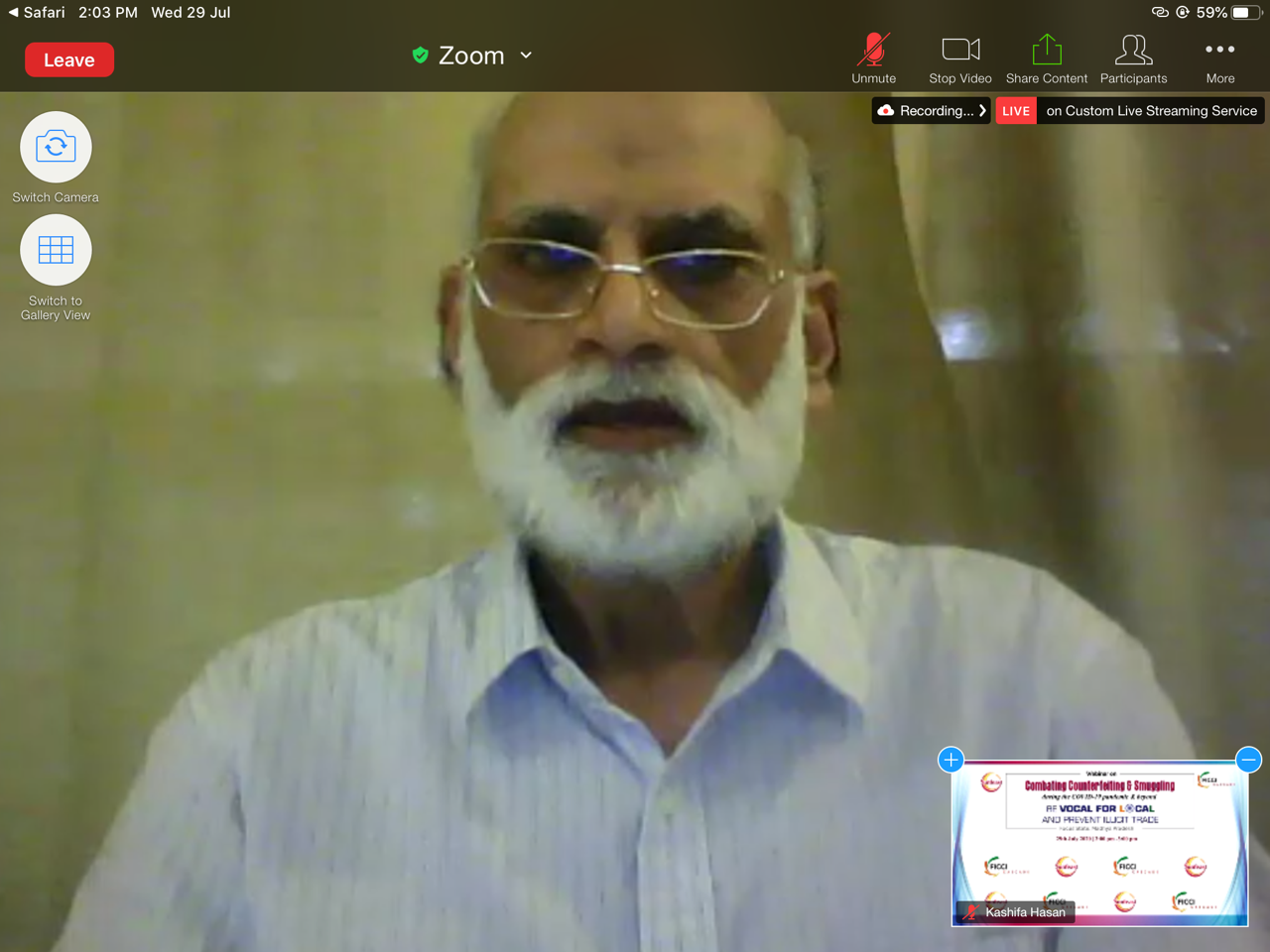 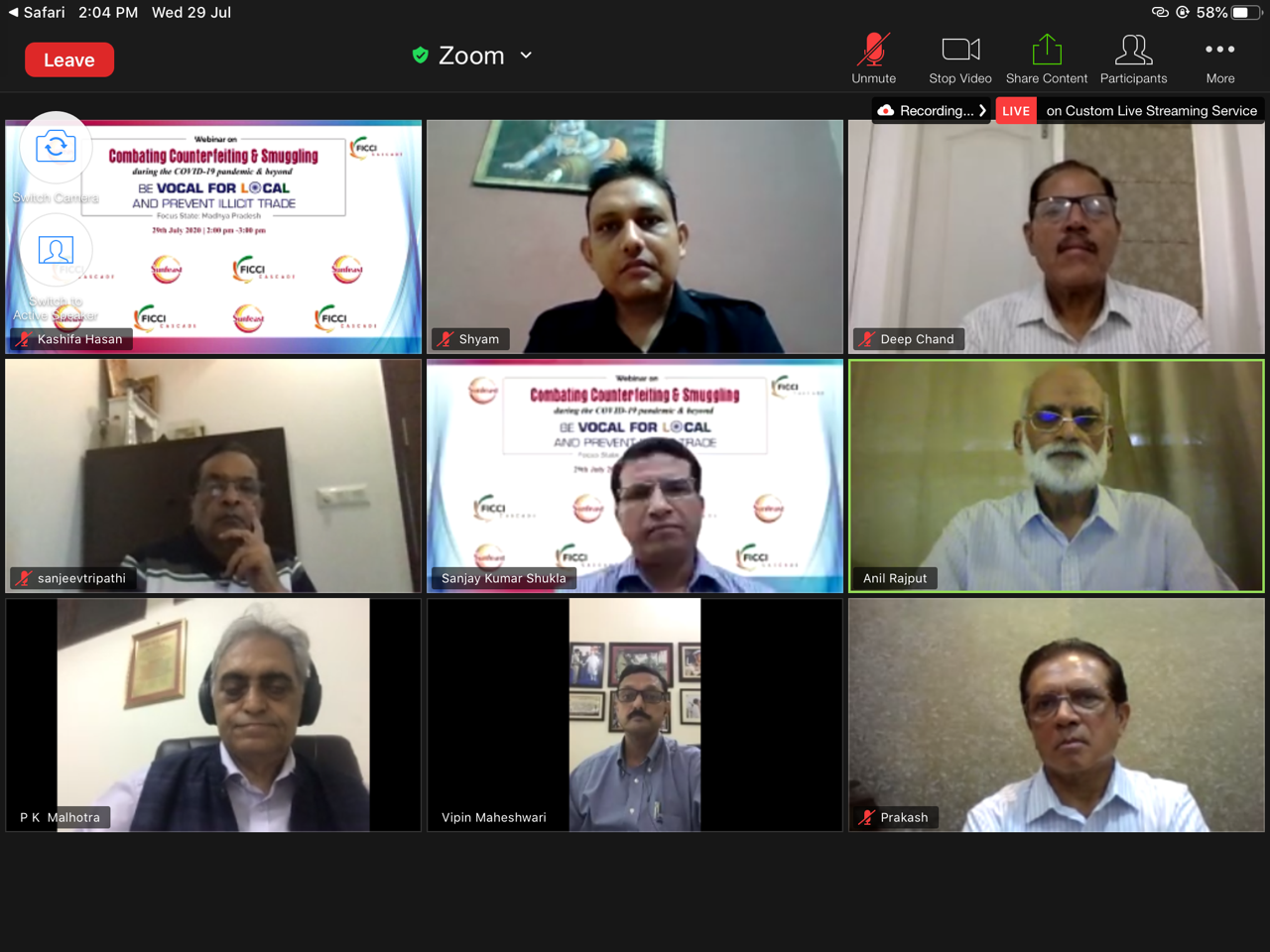 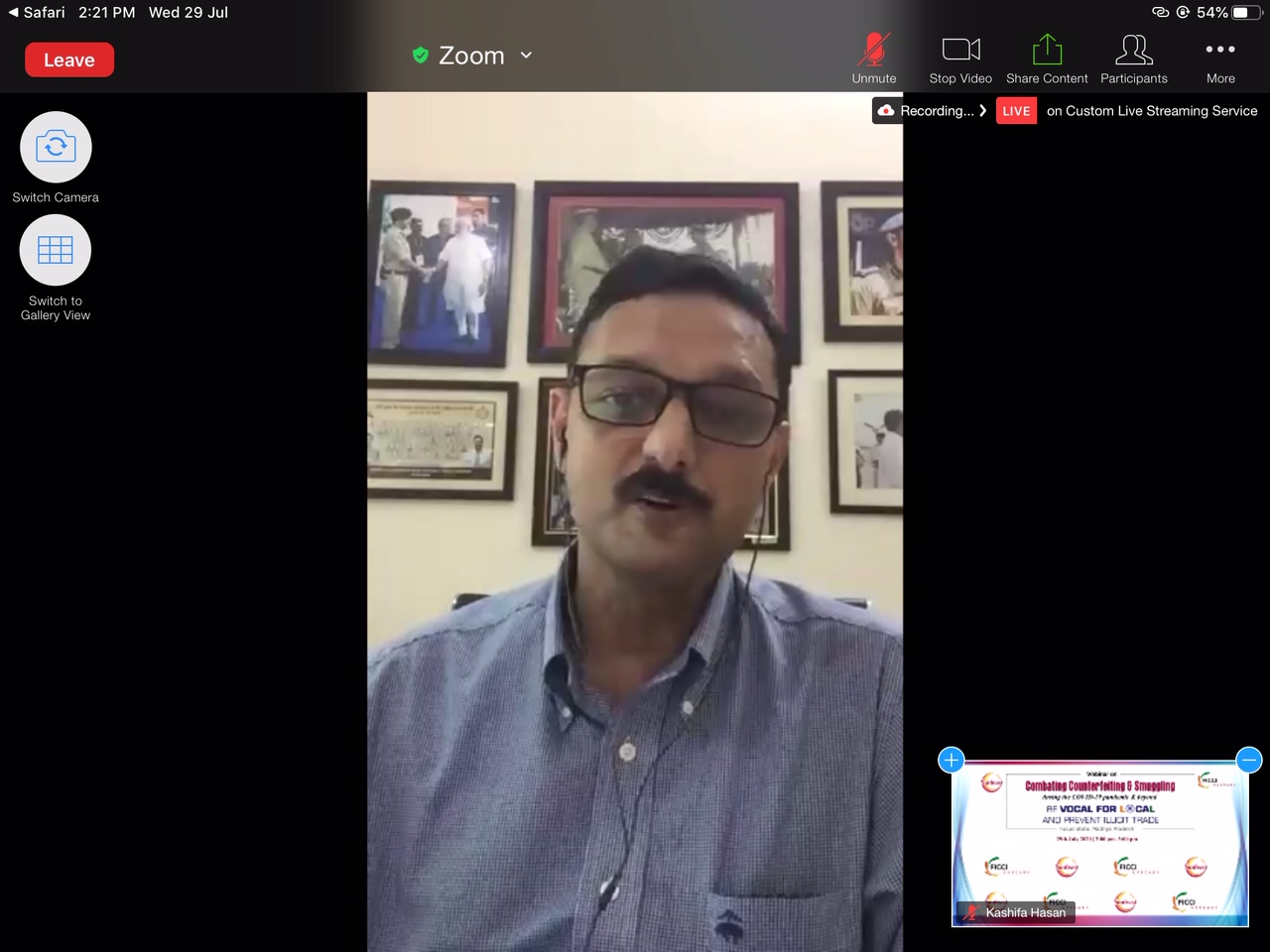 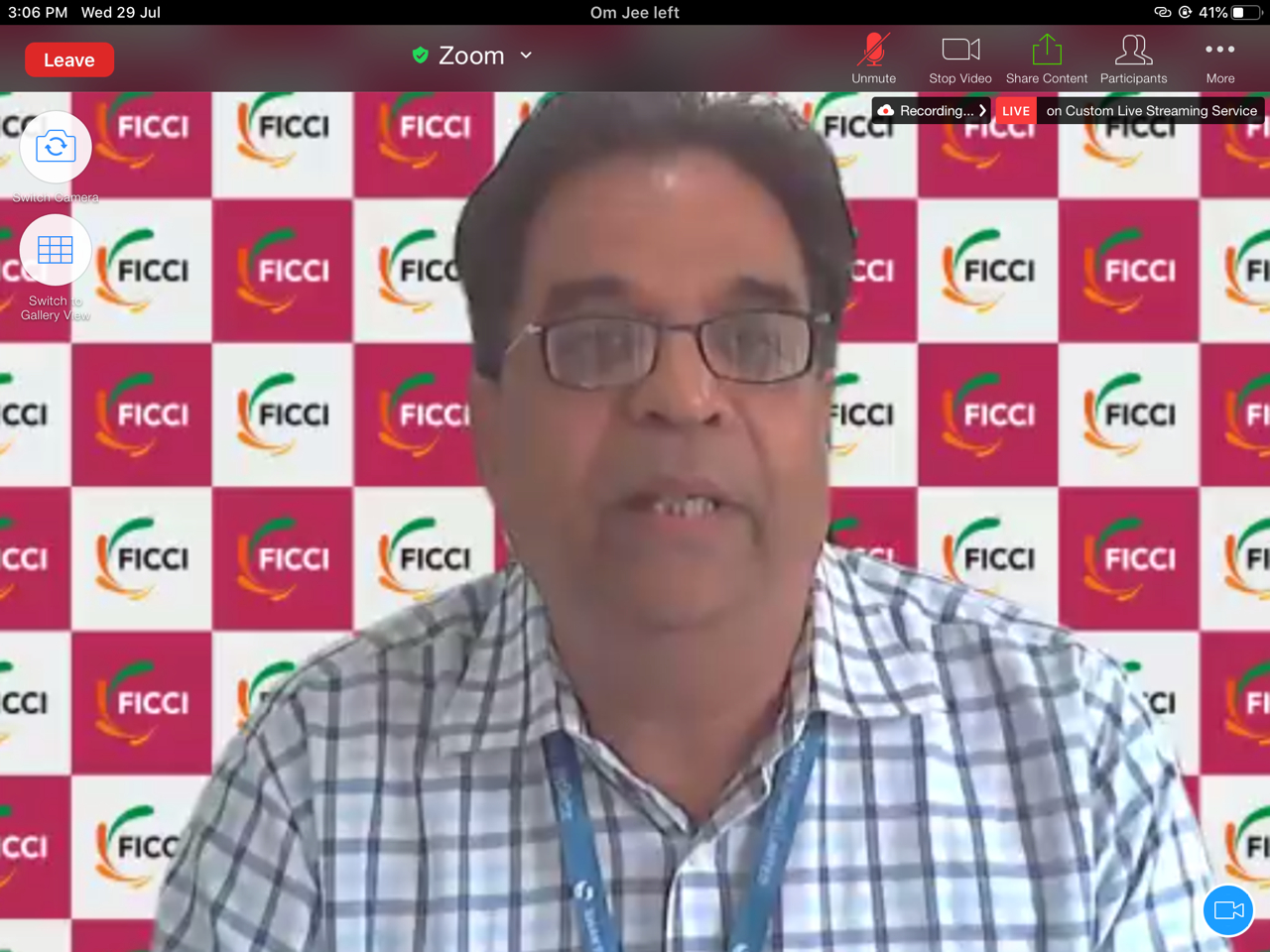