The police took the vehicle to Changsari police station. After conducting a search operation, police seized 13 cartons of foreign cigarettes worth Rs 16 lakh. The cigarettes were being brought from Mizoram to Delhi. Police arrested Om Beer and Anil, the driver and handyman of the van.

According to the police, a man, identified as Aamir Laeeq, 30, was arrested in this connection.

DCP, Central, Shweta Chauhan said a tip-off was received that a person, involved in smuggling of imported cigarettes, was standing near a house at RodgranFarashkhana area with cartons of illegally smuggled cigarettes.

Subsequently, a police team and conducted a raid and Aamir Laeeq was apprehended from the spot with illegally smuggled cigarettes.

“Preliminary enquiry has revealed that the recovered cigarettes were being illegally smuggled from Dubai,” the DCP said.

The police have registered a case under sections 7 and 20 of the Cigarette & Other Tobacco Product Act and further investigation is underway, the official added.

Prayagraj: Sleuths of special task force (STF) on Tuesday claimed to have busted an inter-state racket involved in liquor smuggling and arrested its two key members near Naveen Mandi over bridge on Lucknow-Gorakhpur highway in Ayodhya district while they were taking the illegal liquor consignment to Bihar.

The police have seized 290 cartons of illegal liquor worth Rs 40 lakh, one truck with fake registration plate, two mobile sets, one PAN card, one DL and Rs 2110 cash from their possession.
The arrested persons identified as Mahendra Pal and Pawan Kumar, were residents of Ropar in Punjab state.

Deputy SP (STF) Navendu Kumar told reporters that after receiving inputs that racketeers were involved in smuggling of illegal liquor from Delhi\ Haryana to Bihar towns via UP, a team of STF intercepted a truck carrying illegal consignment of liquor.

He added that the miscreants had hidden the illegal liquor consignment among the cartons of ready-made hosiery, cotton, cosmetics, auto\car accessories, mattress, bathroom hardware’s and other items.

STF claimed that a group of liquor mafia from Punjab’s Girakhpur Mohali was involved in smuggling of liquor to Patna in Bihar to earn hefty profits.

New Delhi, Apr 27 (PTI) The police have arrested a man and recovered 3,650 packets of illegally smuggled cigarettes worth Rs 7.3 lakh from his possession, officials said on Wednesday.

The accused has been identified as Aamir Laeeq, a resident of RodgranFarashKhana in central Delhi, they said.

The Delhi Police received information about the smuggling activities and constituted a team of six officers who laid a trap and arrested the accused with cartons of illegally smuggled cigarettes, Deputy Commissioner of Police (Central) Shweta Chauhan said.

“Preliminary enquiry has revealed that the recovered cigarettes were illegally smuggled from Dubai. A case has been registered under the relevant section of the Cigarette & Other Tobacco Product Act 2003 at Hauz Qazi Police Station,” she said.

The police said further investigation is being done to ascertain the magnitude of the offence and to identify others involved in the racket,” she added. 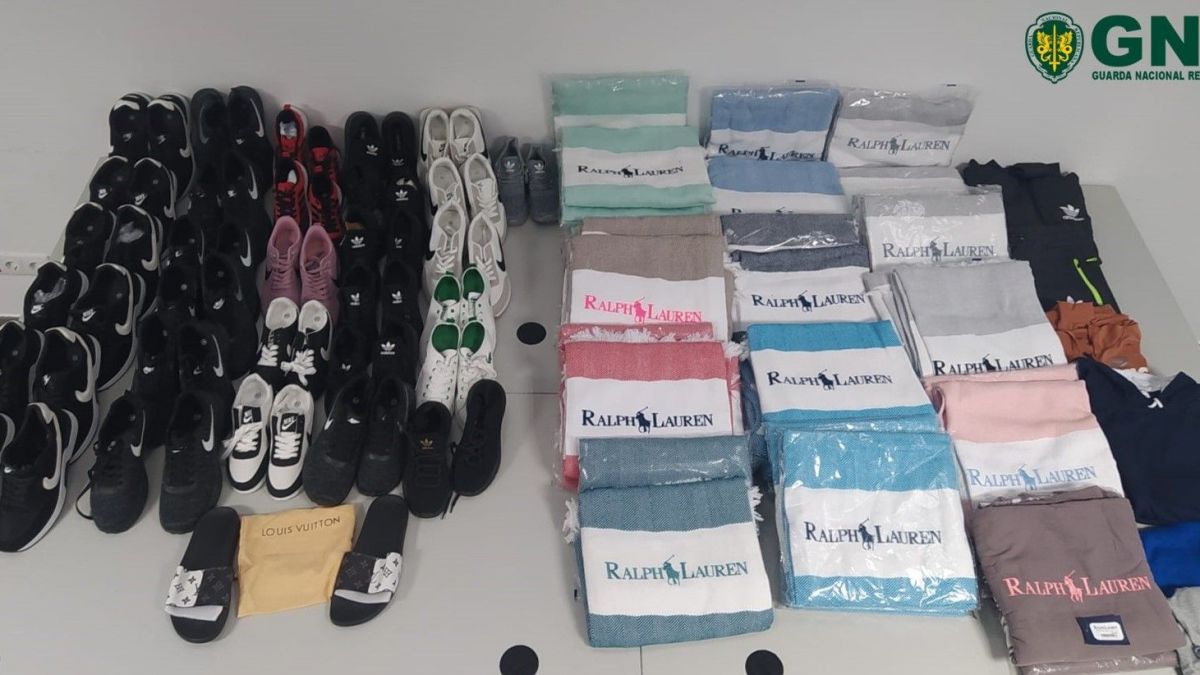 More than 90 people have been arrested and 22,170 items seized between 18 and 24 April as part of the Anti-Counterfeiting Week Operation carried out at fairs, commercial establishments and other spaces, the PSP reported.

During the operation, 92 people were arrested, of which 40 for counterfeiting, imitation and illegal use of a brand, 22,170 items were seized, including clothing, footwear and accessories (bags and belts), with an estimated value of more than €360,000 and three firearms.

In the operation, markets, fairs, commercial establishments, warehouses and other spaces where counterfeit goods and/or in violation of property rights could be produced, transported, stored or sold were inspected at a national level.

The operation had the collaboration of the Authority for Food and Economic Security (ASAE) and the Tax and Customs Authority (AT).

The Bureau of Customs (BOC) on Tuesday said it has confiscated various alleged counterfeit goods estimated to be worth P190 million during an operation in Valenzuela City.

In a statement, the BOC said the items were seized on April 22 during an inspection in a warehouse located in MapulangLupa.

The bureau said the “various Intellectual Property Rights (IPR) infringing goods” were seized through the Manila International Container Port-Customs Intelligence and Investigation Service (MICP-CIIS), together with the National Bureau of Investigation-Special Action Unit.

“The inspection of the warehouse, through a Letter of Authority (LOA) issued by the Commissioner of Customs, revealed the presence of imported kitchenware, housewares, IPR infringing goods, and foodstuff, among others,” the BOC said.

“Inventory of the goods shall be undertaken by assigned customs examiners and shall be witnessed by CIIS, Enforcement and Security Service (ESS), and representatives of the warehouse,” it added.

The BOC said a warrant of seizure and detention will be issued against the subject goods for a violation of Section 118 (f) of Republic Act (RA) No. 10863 or the Customs Modernization and Tariff Act in relation to R.A. No. 8293 or the Intellectual Property Code of 1999.

Agartala: Police arrested two persons in Tripura’s Khowai district after fake Indian currency notes with a face value of Rs 5.72 lakh were seized from their possession on Sunday, an officer said.

Based on intelligence inputs about movement of two bike-borne men with forged notes, a police team led by Sub-Divisional Police Officer (SDPO), Teliamura, SonacharanJamatia started checking vehicles to intercept them.

“Sensing trouble, two men identified as BajiraiReang (31) and Rakesh Malsom (32) of Taidu area of the same district tried to abandon their bike near Karoilong petrol pump but policemen on duty apprehended them before they could flee. They were taken to Teliamura police station for interrogation”, said the officer.

During search, forged Indian currency notes with a face value of Rs 5.72 lakh were seized from the bike, he said.

The fake currency note was in Rs 2000 and Rs 500 denomination. Both of them have been arrested, the officer added. 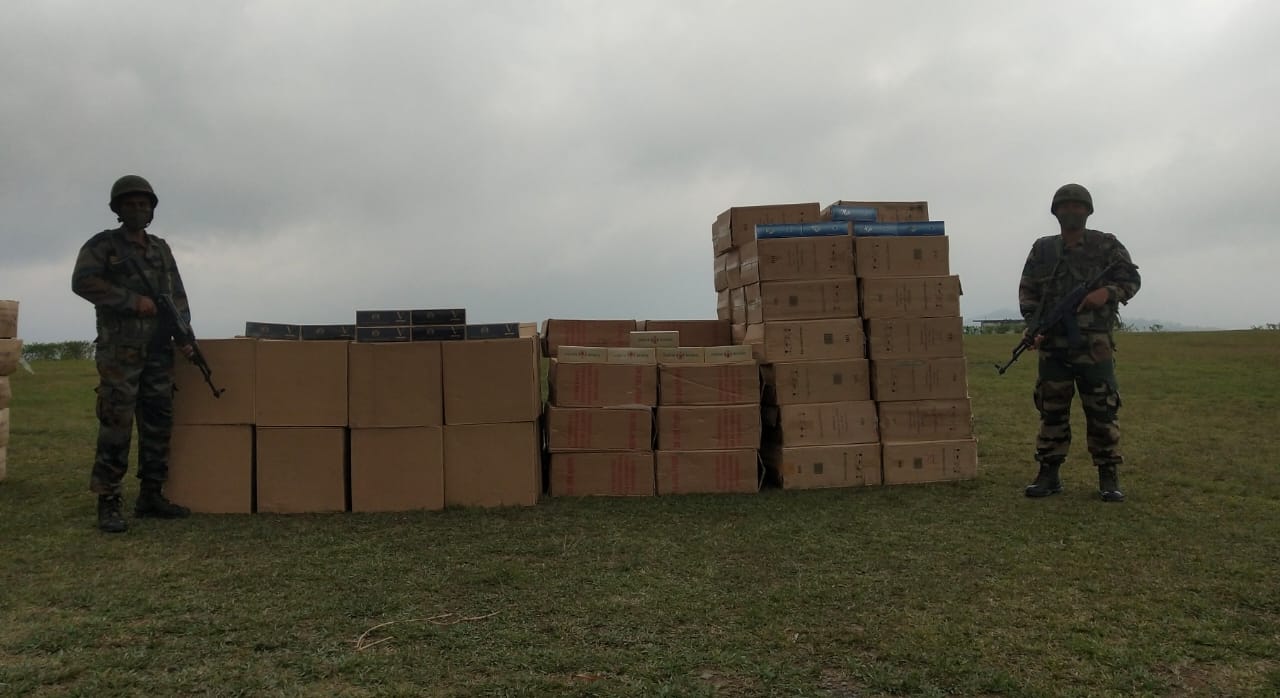 In a major haul of smuggled items, the Assam Rifles have recently confiscated a massive stash of illicit foreign-origin cigarettes from Champhai District with an estimated market value of Rs 1.30 Crores.

According to official sources, the Serchhip Battalion of the paramilitary troop recently recovered 100 Cases of foreign-origin cigarettes from General Area Zote in Champhai District of Mizoram.

Chennai, Apr 22 (PTI): Foreign currencies equivalent to Rs 1.95 crore, gold foils, cigarettes and electronic goods worth Rs 43.92 lakh have been seized at the airport here in two separate incidents, and three passengers arrested in this connection, the Customs Department said on Friday.

In the first incident on Thursday, the Customs officials intercepted some passengers bound for various destinations, including Dubai, and Colombo, and confiscated the currencies concealed in their rectum and in the hand baggage.

In the second incident, the officials seized the gold foils, cigarettes and electronic goods from a passenger who arrived here from Dubai on Friday. He was arrested and an investigation was on, the release said.

Pernem police has busted an interstate burglary racket with arrest of two persons and recovery of electronic items worth Rs 25 lakh.

According to Pernem police, there had been continuous burglaries reported from different places like Ashwem, Morjim, Mandrem and Arambol in the last two months, where burglars used to target foreign and Indian tourists by stealing their valuable items like laptops, Ipad, cameras, mobile phones, cash, etc.

Pernem police said they were continuously on track to nab the culprits, however they used to change the places.

During investigation, police received inputs that the accused persons are from Kerala and Karnataka, and sought the assistance of the Karnataka and Kerala Police. Pernem police then arrested Lathif Khan (28) and K S Azeez (46).

Police investigations revealed that the accused would break open locks of the main door or by entering from the windows at night. They would flee with the stolen electronic items to Karnataka and Kerala.