March 2, 2022 by adminficci Past Events 0 comments

FICCI CASCADE (Committee Against Smuggling and Counterfeiting Activities Destroying the Economy) collaborated with the Ministry of Consumer Affairs. Govt of India, to encourage the country’s youth to be a part in the socio-economic development of the nation by creating a youth movement against smuggling and counterfeiting. In this endeavor, FICCI CASCADE, jointly with the Ministry organized a painting competition, on the theme ‘Youth for Socio-Economic Development — Paving the Way for India’s Amrit Kaal’.

With the objective to generate awareness on the adverse impacts of smuggling and counterfeiting, especially among school children who are the consumers of tomorrow, this competition was organized as a run up to the World Consumer Rights Day celebrations by the Ministry of Consumer Affairs. This day, which is celebrated world over on 15th March stands in solidarity with the international consumer movement, demanding consumer rights to be respected and protected.

Mr Rohit Kumar Singh, Secretary, Ministry of Consumer Affairs, Govt of India said, “Our future generations are the hope for real change, empowering and strengthening them to act for national development will help in shaping the future of our country in a brighter and more prosperous manner. World Consumer Rights Day is celebrated every year by our ministry to protect the rights of consumers and to ensure that the consumers are not subjected to market abuse or social injustice that may undermine their rights.”

Mr Anil Rajput, Chairman, FICCI CASCADE said, “The youth of India are the country’s future. As India marks 75 years of its glorious independence and enters into Amrit Kaal, the 25-year-long leadup to India@100, the youth will play a pivotal role in nation building and advocating socially responsible behavior towards the country’s development.”

On the occasion of the World Consumer Rights Day scores of schoolchildren from across the country demonstrated their resolve to put an end to smuggling by generating consumer awareness. The competition saw an overwhelming response and more than 400 entries were received. The young consumers of India shared their thoughts and ideas through innovative paintings, which depicted the harmful effects of counterfeit and smuggled goods on the country’s economy and its people. The winners of the top three paintings were awarded by Shri Ashwini Kumar Choubey and Sadhvi Niranjan Jyoti Minister of State for Consumer Affairs, Food and Public Distribution.

While the first prize was bagged by Ms. Chandrima Pan of Class X from Delhi’s St. George’s School, the second prize was won by Ms. Supriya Baital of Class XI from Birla Vidya Niketan School, New Delhi. The third position was shared by Mr. Sajal Jain of Class X from Agra Public School, Agra, and Ms. Aaira Katoch of Class IX from Gurugram’s Lotus Valley International School. All the participants were issued a certificate of participation. 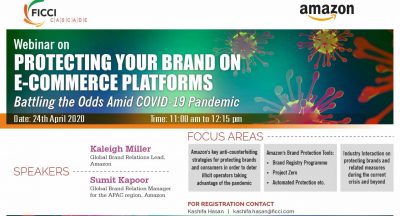